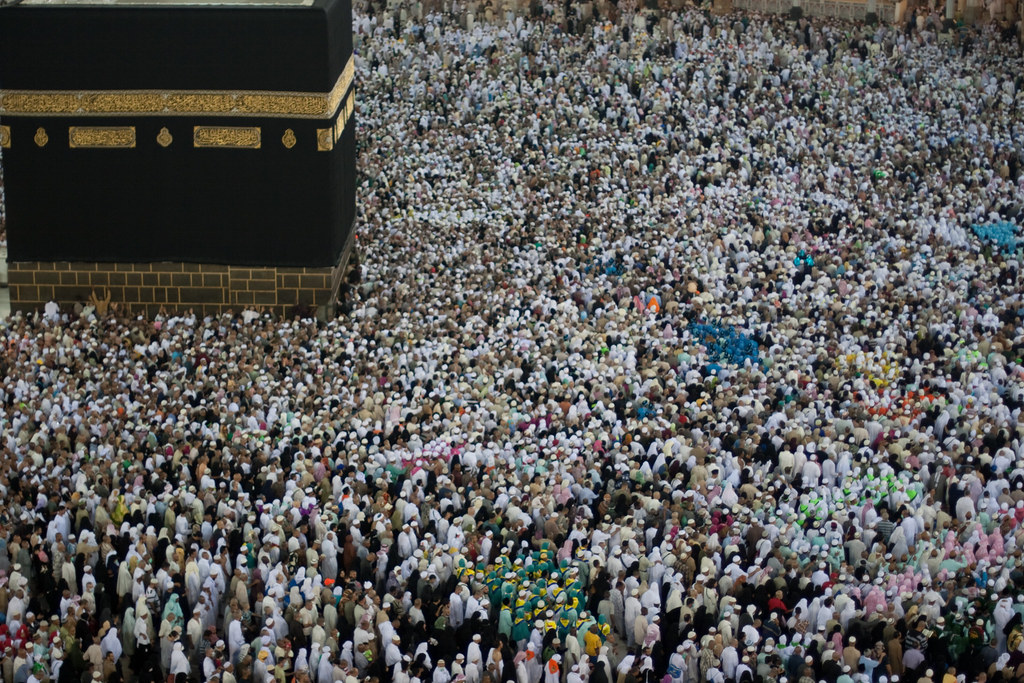 MAKKAH: THE MICROCOSM OF THE WORLD

To the unknowing as well as the unconcerned, Makkah may be a city in the desert with some historical importance, but what does come to light once we actually visit the city, is the fact that it is the microcosm of the entire world. To the faithful, humankind’s centrepoint, appointed by God since time immemorial is none else but the city of Makkah. Such an honour mandates that no matter what one’s racial or ethnic background, the journey to Umm al-Quraaa or the ‘Mother of all cities’, as it has been called in the Qur’an – is a yearning of the heart. This longing is pandered to all year around through the Umrah or the lesser pilgramage, but its true fulfilment is found in the Hajj. Every year the city of Makkah is host to millions of people from all walks of life and all hues and colours during the Hajj, an international event of superb magnitude which is obligatory on all Muslims, male or female, who possess the means as well as the ability to perform the journey.

THE ROAD TO MAKKAH

The period of Hajj sees all roads leading to Makkah. Pilgrims make their way through land, sea and air using all available means of transportation. Special Hajj flights are organised for the event by major world Airlines and special Hajj liners sail from distant lands carrying pilgrims by the sea. Such is the ardent desire to be at the city that some even travel on foot. It is not at all uncommon to hear tales of perilous journeys culminating in Makkah by pedestrians from far away lands. This descent into Makkah from all parts of the world is not a new phenomenon, but one which was foretold by God to Prophet Abraham:

Makkah during the Hajj is a global village in its true sense. Pilgrims, whose numbers during the event surpass the population size of many countries, are drawn to the city from every continent on the planet.

HUMANITY AT ITS FULL SPLENDOR

Black or white, young or old, male or female, able bodied or disabled, rich or poor, thus humanity in its full splendour can be witnessed during the Hajj. Even the diversity around fashion which distinguishes one community from the other is quite apparent and was marvelled at by former MTV star presenter Kristiane Backer in her autobiography:

“They came from all over the world and I never tired of the variety of faces, colours and outfits. There were women from Mali looking regal and elegant in gorgeous lilac orange, and green robes wearing matching turbans with a strip of fabric hanging down the side. Indonesian women all had white headscarves and white gloves and white headscarves that hung to their breast and were embroidered with lace. The persian women usually wore long black or blue robes with grey chadors that came down below their hips while Morroccans could be recognised by the hoods on their jalabias. Another group of women sported bright yellow veils with blue labels sewn onto them, which indicated that they came from Kerala in India. I also heard German, French, English and American voices.On my wanderings, I came across men from Tajikistan wearing black quilted satin and velvet coats and matching black gold-framed caps. There were other men with palestinian scarves wrapped around their heads, shiny silver black turbans, traditional Arab head dress or small white caps. Many Pakistanis had long henna-dyed beards.” (From MTV to Mecca, pp 314)

Makkah of today is a modern city with all amenities and comforts for travelers from all over the globe. But what remains unchanged is the sublime spirit of the Hajj, which no words can describe and which can only be felt by the heart of the pilgrim.

The diversity at Hajj is not a mere social phenomenon, but one of immense importance for the wider welfare of humankind. Pilgrims ranging from every possible ethnic background return to their homelands with an increased level of tolerance for their fellow-men who may be different from them. The interaction with people of different race and ethnicity leave no room at all for racism. The pilgrims are in a state of cooperation and display the best of their behavior during the days as they are commanded by Allah:

“Hajj is [during] well-known months, so whoever has made Hajj obligatory upon himself therein [by entering the state of ihram], there is [to be for him] no sexual relations and no disobedience and no disputing during Hajj. And whatever good you do – Allah knows it. And take provisions, but indeed, the best provision is fear of Allah. And fear Me, O you of understanding.” Qur’an 2:197

Exposure to a diversity of groups makes the visitors to Makkah more tolerant, not only towards those who are present during the pilgrimage, but also those who are absent. American civil rights activist Malcolm X drastically altered his views on race after performing the Hajj. In a letter from the Hajj, he wrote:

”We were all participating in the same ritual, displaying a spirit of unity and brotherhood that my experiences in America had led me to believe never could exist between the white and non-white … what I have seen, and experienced, has forced me to rearrange much of my thought patterns previously held.’‘ (The Autobiography of Malcolm X)

While the world rages with ethnic and national conflicts, each year Makkah demonstrates to us that people can very well intermix despite differences on national, sectarian, and gender lines and peacefully coexist with each other. Words are not sufficient to describe the splendor offered by Makkah. To experience it you will have to visit the city and be there in person.